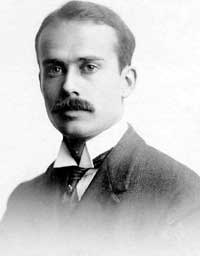 Clifford W. Beers in 1908, from the frontispiece of his book A Mind that Found Itself, courtesy of Wikimedia Commons.

The Era of Mental Sanitation

Before mental health awareness became a mainstay topic in HR, illnesses and issues of the mind were not well understood and often thought about in extremes, or perhaps worse - not thought about too much at all.

When our grandparents first joined the workforce, it was still called "mental sanitation" by professionals and lobotomies were a mainstream psychiatric treatment up until the 1960's for everything from depression, epilepsy, and what we now call PTSD. 12-year-old Howard Dully underwent the procedure due to a "reluctance to go to bed on time" and had the bad habit of daydreaming. Mental health and illnesses were so poorly understood, and with that, feared and stigmatized, that mental health institutions became a trope in popular American horror films, campfire stories, and haunted houses.

It took one champion at the beginning of the 20th Century, Clifford W. Beers, who turned a personal struggle with mental illness into a national movement and of the millions of others who came together to fulfill his vision.

Beers was born in New Haven, Connecticut, in 1876, in a family of five children who would all experience struggles with mental health. The family suffered a series of tragedies, including the death of one child in infancy. A second child, who began having seizures as a teenager, also died early, and as a young man, Clifford worried that he would develop the same condition. Although he and three other siblings lived into adulthood, all would eventually die in mental health institutions—two by committing suicide. Beers was always exposed to the prevailing "scientific" ideas around mental hygiene as it was called at the time, as well as incumbent rhetoric.

Academically gifted, and therefore considered of sounder mind than his siblings, Beers went on to graduate from the Sheffield Scientific School at Yale despite a few severe bouts of depression, and during his time there was a member of Berzelius- a secret society centered around the Socratic idea that "the unexamined life is not worth living.”

The Sheffield Scientific School starkly contrasted Yale's old-world bureaucratic pedagogies; pioneering teaching liberal arts alongside scientific disciplines to put it all into context, founding the modern American multidisciplinary pedagogy and also the Doctorate system- granting the first Ph.D. in America in 1861 as well as the first engineering Ph.D. in America. On-campus- the main body of Yale and Sheffield's differences were felt and were a topic of light-hearted tension between its students. Exposure to new institutions that were centered around critical examination and epistemological debate no doubt influenced how he in turn looked at his mental health. He graduated in 1897.

Over the next three years, he worked as a clerk in New York City, gradually becoming increasingly anxious and distressed. In the summer of 1900, he returned to his family home and attempted suicide by throwing himself from his bedroom window. While in the hospital recovering from these injuries, he experienced hallucinations and paranoia. As his body recovered at home, his mental state deteriorated further and he gave up speaking, convinced that he and his family were in grave danger. His family decided to place Beers in an institution for the care of the mentally ill.

Between 1900 and 1903, he was hospitalized at Stamford Hall, The Hartford Retreat, and the Connecticut State Hospital at Middletown. He was mistreated by staff, experiencing physical abuse and degrading treatment, and resolved to campaign for reform. After his release, he returned to New York City but suffered a relapse and spent the last few months of 1904 back at the Hartford Retreat. In January 1905, he left the institution and completed a book about his experiences three years later, A Mind That Found Itself.

The Mind that finds America's Self

The book made waves in a newly bourgeoning modern psychology community and launched the mental health reform movement in the United States. The book discusses the seriousness of his condition as well as highlights the brutal practices that may have slowed his recovery, helping to remove the stigma of mental illness among the general public.

Two months after the publication of his book, Beers joined with Meyer, physician William H. Welch, and philosopher William James to found a multidisciplinary Connecticut Society for Mental Hygiene to improve standards of care and attitudes toward the mentally ill, and to prevent mental illness and promote mental health. Several other states quickly joined the movement and established their societies on the backs of the national momentum Beer's caused.

Since then- we've seen some remarkable progress through Beer's legacy. In 1966, Mental Health America successfully advocated for the inclusion of mandated mental health services in Medicare. In 1974, the U.S. Civil Service Commission acceded to Mental Health America’s demand that a “Have you ever been mentally ill?” question be removed from federal government employment forms. And in 2005, Mental Health America’s advocacy resulted in a landmark Supreme Court ruling declaring the death penalty for juvenile offenders unconstitutional, thereby removing 73 individuals from death row.

If you want to be a part of Beer's continuing legacy, there are a few ways to do so. You can partner with MHA for mental health awareness month which is coming up this May. Also, the MHA offers certifications for exceptional workplaces for mental health at https://www.mhanational.org/bestemployers. This is a great resource to see where you are and what you can improve on.